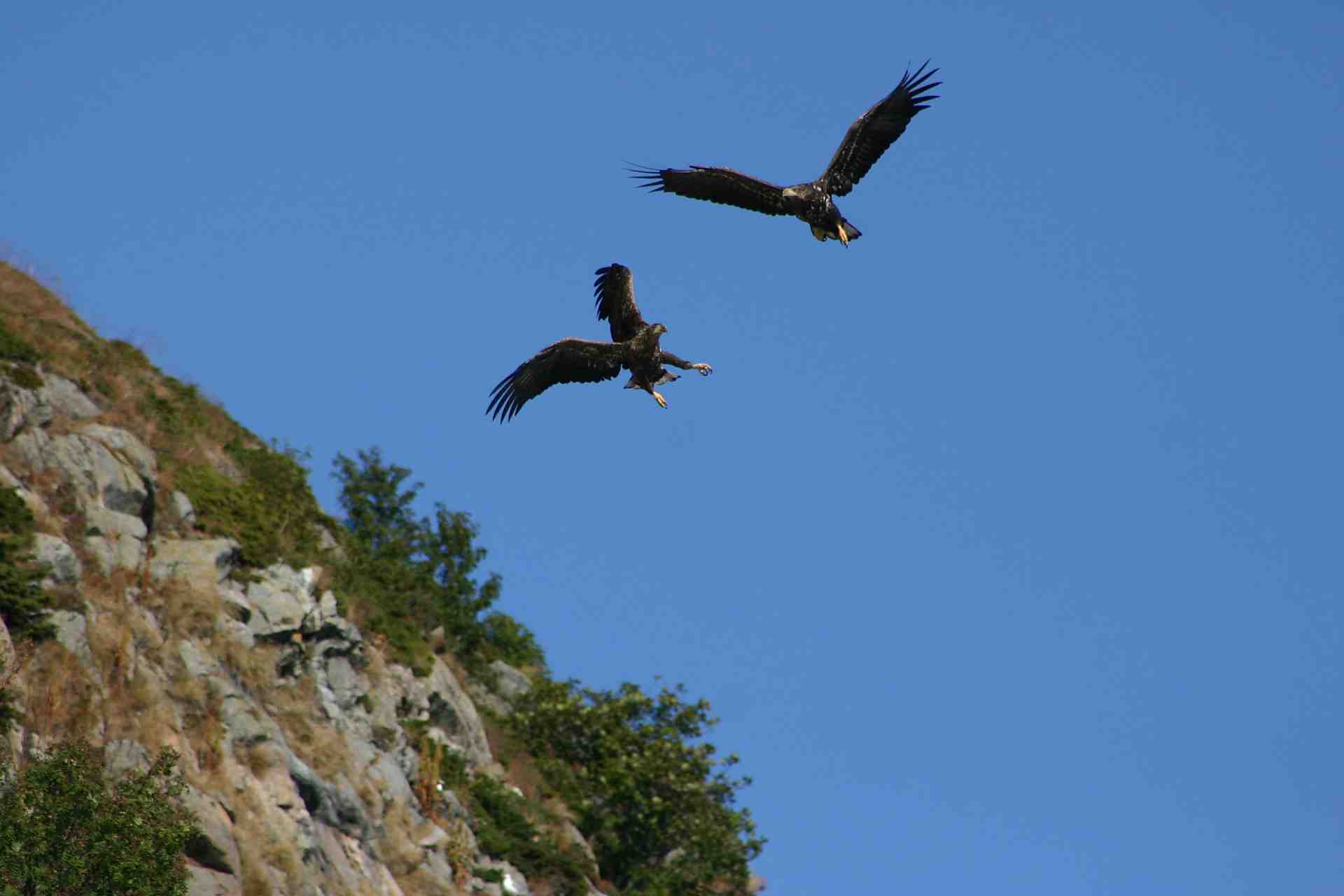 There are several pairs of eagles here with a good stable supply of food. Due to the consistent food supply they have been here for several years, nesting and producing young each year.

Easy access to food from the sea is the reason why so many sea birds can be seen here. Bird rock at Helløy is evidence of this. It is several years since the number of nesting pairs of kittiwakes exceeded 6000. The population is growing and the birds have had to extend their nesting area due to lack of space. Bird rock is like a huge food larder for the sea eagle. It is often here finding food, especially when the young birds are old enough to try leaving the nest. Their ability to fly is not fully developed and they are easy prey. The sea eagle is often seen sitting at the top of the rock waiting for the right moment to stoop down and catch its prey.

From a boat you have the perfect place from which to view the daily events out in nature.

The sea eagle starts the mating game, which happens in the air, early. We have seen this flirtatious game as early as Feb/March. Then, the stage is set for an acrobatic show where the eagles hook claws and fly together in a downward spiral before letting go. It is admirable how fast and easy this majestic bird flies through the air with a wingspan of up to 2,4m.

The sea eagle is intelligent and uses several methods of hunting dependant on what is hunted. We have observed 3-4 eagles hunting a seagull. Whereby 2 eagles tire the gull out and the 2 rested eagles dive in for the kill, bringing in their prey. During the winter the sea eagle can wait several hours…… with good reason. It can look like the eagle is just sitting there, but it has a plan. It has been watching the otter swimming past and it knows that the otter is trying to catch fish. From where it sits, the eagle keeps a close eye on the area. When the otter then comes on land to enjoy its catch, the eagle stoops as if from nowhere and steals the catch from the otter. We have witnessed this, a  most fascinating sight.

You too can experience the wonderful life in the archipelago. We arrange eagle safaris by boat with groups from 6-10 people for 750kr. per person. Duration 1-2hours.